In this short Photography & Photoshop tutorial i’m going to walk you through using an off-camera flash to capture this photograph of a daffodil against a seemingly black background and then using Photoshop to clean it up to look like this photograph.

To begin with you’ll need an off-camera flash and ideally either a tripod or a way of fixing the flash so that it can be directed to fire at the flower, level with the petals, about 6-7 inches away. You’ll also need a way to remotely trigger the flash, personally I recommend the Neewer Remote Trigger which is available on Amazon for £9.23 (at the time of writing this) for a cheap and reliable remote trigger.

Set your flash up as instructed above and set it to Manual and at 1/64 power and get yourself positioned side on to the flower. Camera settings for this i’ve used f/22 (to close down the Aperture and darken the background as much as possible), ISO 100 (for the highest quality image), 1/200 (the limit set by the flash – flash sync speed).

Room lighting wise I was sat next to the light switch and so I had the kitchen light on to start with and autofocussed upon the flower, I then maintained that focus and turn the light off before completing the exposure by taking the photograph (if you have an assistant to hand you can also ask them to turn the light off, or alternatively this could be conducted outside where room lighting isn’t a factor). 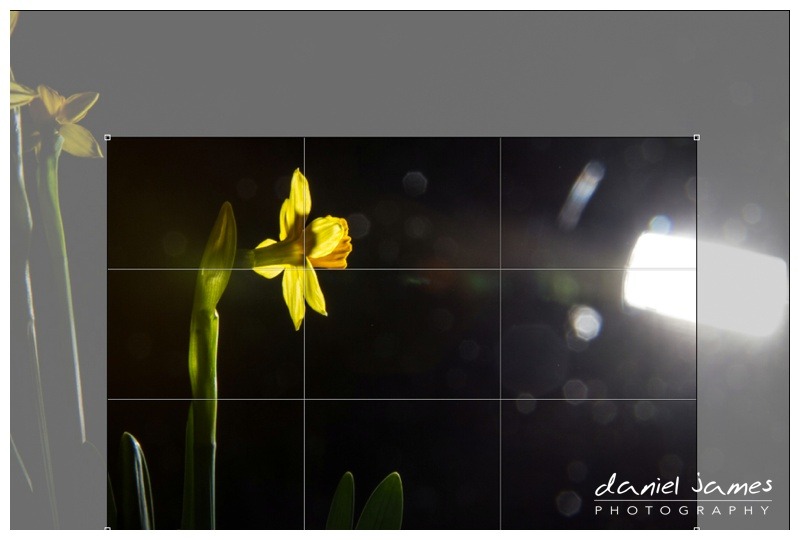 In Photoshop, as you can see, I decided to crop it quite a bit to focus upon just one main flower and a few select leaves. I cropped in Camera RAW and had the Rule of Thirds Grid switched on to make sure that I was observing the Rule of Thirds in my composition of the final image.

Aside from cropping, I made a few more very minor modifications to the original image in Camera RAW which was to increase the Clarity and Saturation to make the flower stand out a bit more against the dark backdrop. 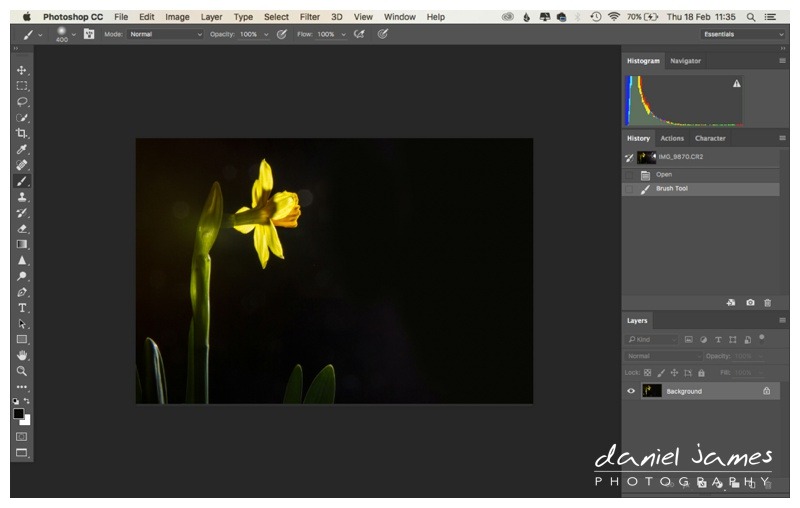 Next I opened the image in Photoshop CC and began to work on it with a simple Brush tool, set to black and at 100% opacity (hardness at 0% to begin with to make big sweeping brushes). Firstly I removed the Flash itself on the right hand side by simply painting it out. 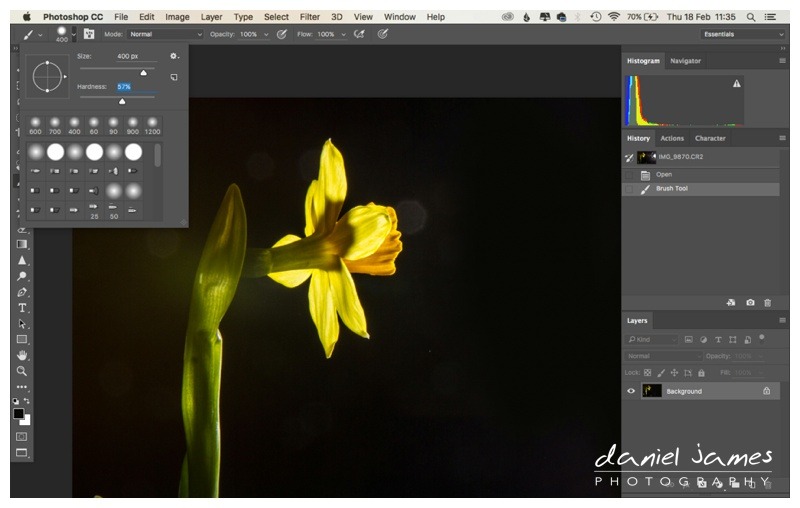 To remove the lens flare I zoomed in closer to the flower and made the brush hardness around 50-60% in order to give a more defined edge to my brush strokes. I then carefully cleaned up around the flower and that completed my image. A relatively simple tutorial there to get you playing with flash light remotely and of course you could always bring a model in instead of a flower (however be careful with the flash around models eyes – never bare bulb directly at them!) to create some very dramatic lighting, similar to the Film Noir light I used for my 365 Project image ‘Noir‘.

If this has helped you in any way with lighting, Photography or Photoshop please leave a comment below!

April 3, 2014
Daniel James
Child & Baby Portraits, Family Portraits, Portraits
No Comments
Meet Grace, Woody, Jake, Lola & Dan, who joined us for a Family Portrait at our Studio. The Photo Shoot was filled with laughs, jumps and karate. We grabbed some great…
Read More

April 1, 2014
Daniel James
Family Portraits, Portraits
No Comments
Here’s Elspeth and family who joined us for a fun, relaxed Family Photo Shoot. It’s always great fun when a family is willing to raid the props and this family certainly…
Read More 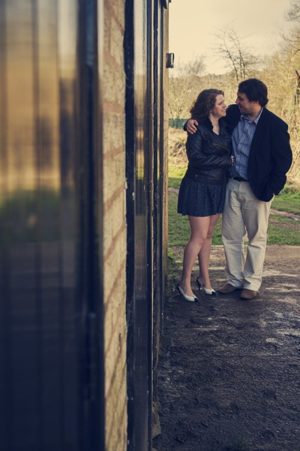